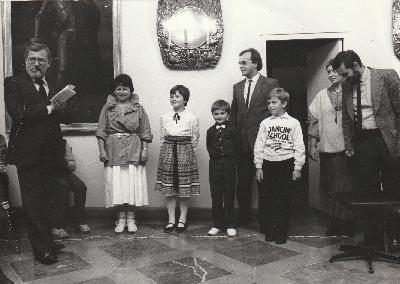 Concert of children and parents, "Music September" in Baranów Sandomierski, from the left: Krzysztof Droba, Grażyna Krzanowska, Aleksandra Krzanowska, Kamil Krzanowski, Andrzej Krzanowski, Krzysztof Lasoń, Anna Lasoń, Aleksander Lasoń, photo: Wacław Pintal
First there was Andrzej - a cordial, warm man who thinks seriously about music. Only then did I get to know his music, which also turned out to be close to me. I said that I was looking for an antidote to post-serialism, to music dehumanized by Darmstadt, and here by Schaeffer. And Andrzej's work was such an antidote for me. It was a world of sounds (often new, such as the original spaces of accordion sounds) in the service of emotions and expression; dramatic, lyrical, always – something one could feel - honest.
Krzysztof Droba