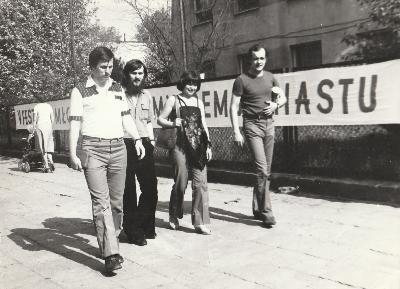 Young Musicians for a Young City Festival in Stalowa Wola, from the left: Eugeniusz Knapik, Aleksander Lasoń, Grażyna Krzanowska, Andrzej Krzanowski, 1979, photo: Stanisław Szlęzak
We were classmates. In Stalowa Wola, with some invisible thread, Krzysztof Droba wove us into a generation and it turned out that there are certain features of our work that made it possible to gather completely different artistic personalities into one group.
Eugeniusz Knapik