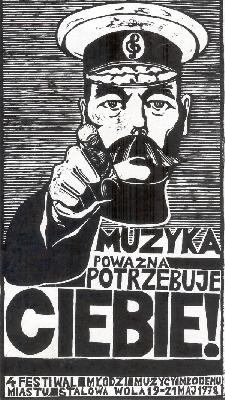 A poster for the Festival in Stalowa Wola by Jacek Bukowski
We all must have a master, and probably do. I loved Górecki's music, hence some of my technical and technical tricks, but I always tried to make it possible to subscribe to it, so I would not be called "the little Górecki", but be Krzanowski. From Lutosławski, I learned how to use the orchestra and chamber ensembles, but in a more watchmaking manner. I believe that we first must discover quantity, and then find some sort of individual path.
Andrzej Krzanowski