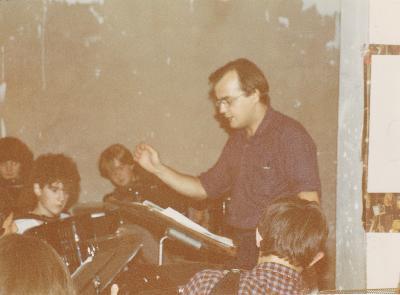 Rehearsal before the concert of the "Musica '83" Contemporary Music Festival in Strasbourg, photo: family archive
Krzanowski penetrated, enriched, broadened, (...) brought out new tonal, articulation and expression possibilities, and the critics emphasized this, discussed it, desiring to get away from the accordion using this accordion, informing, for example, that this accordion is used by Krzanowski to depict whether he imitated the poetics of electronic music. And Krzanowski, instead of treating it as an episode, a stage, highlighted accent (it would then be politically correct), he built his world out of it and around it (which could cause anxiety). He was eminently romantic in action.
Andrzej Chłopecki