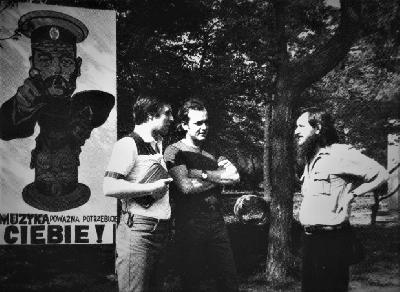 Stalowa Wola, 1979, from the left: Eugeniusz Knapik, Andrzej Krzanowski, Aleksander Lasoń; photo by Stanisław Szlęzak
Through perhaps conscious psychological and social process of composing music for the accordion by Krzanowski, which was, after all, an instrument previously absent from the canon of European music, the composer broke through certain aesthetic barriers. There are no bad instruments. That was what Mozart could have said when he played the clarinet in the orchestra. After all, it was a folk instrument at that time. We all think with colors at the very beginning, from the cradle. And this accordion timbre is great when such an accordion master as Andrzej Krzanowski gets his hands on it ...
Witold Szalonek