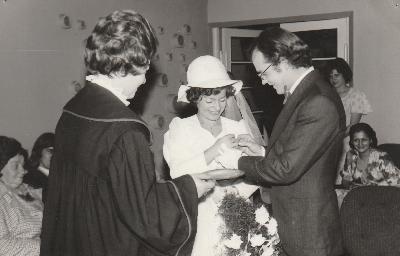 Wedding of Grażyna Makowska and Andrzej Krzanowski in Legnica, photo: Family Archive
Krzanowski was inspired by the sounds of the world around him: the timbre in which he grew up and which became the hallmark of his music. I'll tell you what it came from. Andrzej lived in Czechowice-Dziedzice. When I came to it for the first time, I was struck by the acoustics and the "chatter" of this small town. In the evenings, when it was already very quiet, I heard the prolonged whistles of the locomotives. The sirens of the refineries also rang out frequently, announcing the time of the second or third shift, sometimes a fire or other danger. Andrzej was soaking this "music" up since he was a child. He lived close to a refinery, close to a train station, an ambulance and a church. The sounds of alarms, bells and sirens "entered" him in a natural way.
Grażyna Krzanowska